You are here: Home › Blog › The Power of Positive Thinking
By Holywell Church on April 18, 2018 in Article, News 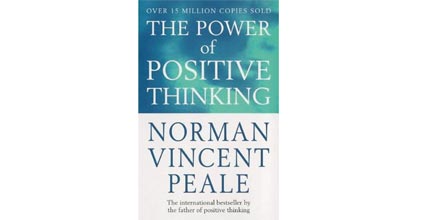 In our circle healing session tonight (Wednesday 18th April), for the philosophy part, we talked about the power of thinking positively. On this subject, Peter gave an overview of the famous book by Norman Vincent Peale ‘The Power of Positive Thinking’ which he said was one of his favourites. I can highly recommend this book to everyone.

The overview was from this review.

This is the text from the above review article with some minor changes…..

Norman Vincent Peale was an American minister and author known for his work in popularizing the concept of positive thinking, especially through his best-selling book The Power of Positive Thinking. He served as the pastor of Marble Collegiate Church, New York, from 1932 until his death, leading a Reformed Church in America congregation. Peale was a personal friend of President Richard Nixon. President Donald Trump attended Peale’s church while growing up, as well as marrying his first wife Ivana there. Peale’s ideas and techniques were controversial, and he received frequent criticism both from church figures and from the psychiatric profession. In the 1930s he began a radio broadcast, The Art of Living, that was to be heard weekly for 54 years, and established a clinic of Christian psychotherapy with psychiatrist Smiley Blanton.

In a nutshell: You can achieve anything if you have faith.

The Power of Positive Thinking (1952) has become linked with a Pollyanna-style attitude to the world that sees and hears no evil, and believes a happy smile can melt all obstacles. ‘Every day, in every way, I am getting better and better,’ is Emile Coué’s famous positive thinking mantra, which to most ears is superficial and even idiotic.

However, Peale wrote: ‘This book is written with deep concern for the pain, difficulty and struggle of human existence. It teaches positive thinking, not as a means to fame, riches or power, but as the practical application of faith to overcome defeat and accomplish worthwhile creative values in life.’

These are not the ideas of someone with an unrealistic take on life. Peale saw plenty of human misery as a minister in New York City, but was not content to provide a weekly sermon; he wanted measurable change in the life of the people he met. Over many years, he created a ‘simple yet scientific system of practical techniques for successful living that works’, tested and refined among thousands of people inside and outside his ministry.

The source of positive thinking

For Peale, there was no greater source of personal power or guidance than the Bible. Biblical quotes are the mainstay of the book and perhaps because it is based on this timeless wisdom, it has amazing power. When statements such as the following are highlighted for us, it is difficult to argue with Peale’s conviction: ‘If God is for us, who can be against us?’ (Romans 8:31) ‘If thou can believe, all things are possible.’ (Mark 9:23)

Peale said we do not have to depend on ourselves as there are incredible sources of power open to us if we only believe in their existence. We make life hard, but an appreciation of the universe’s ability to make good and provide would lead us to see life as flowing and abundant. To gain personal power and peace, we have to be willing to go beyond the personal to something greater than ourselves.

The book features cases and stories, filled with the struggle of humanity, to show defeat is not permanent. Some of the chapters are described below.

How to have constant energy

The knowledge that what one is doing is supported outside oneself and is serving a divine end, through attunement with the infinite, provides a constantly renewable source of energy. Working only for oneself leads to burnout.

Prayer is a space to say whatever is on your mind, in whatever language you choose. Instead of asking for things, give thanks in advance for what you desire and visualise the good outcome. The Peale formula is: ‘Prayerise, picturise, actualise.’

Expect the best and get it

We tend to expect the worst, but an expectation of the best has a way of organising forces in our favour. The subconscious, which regulates many of our actions, merely reflects our beliefs. Alter the belief about an outcome and our actions will seem to be shaped to achieve it. Peale’s phrase is: ‘Doubt closes the power flow, faith opens it.’

New thoughts can remake you

Use only positive and hopeful language for a 24-hour period. Then go back to being realistic the next day. Repeat this over a week and you find what you considered realistic a week ago now seems pessimistic. This new understanding of what is realistic moves up to a higher, permanently positive level.

The book’s principles are easily moved from its original time and place and applied to life. It is refreshing because there are no gimmicky techniques. Expect to find only a bag of well-worn tools for chiselling away cynicism and hopelessness.

Although the book contains things like a ‘prayer for salesmen’, it is something more than a hotchpotch of Christian and capitalist morals. Consistent with most of the self-help classics, it says the highest morality is fulfilment of potential: to give up is to deny yourself all the spiritual and material rewards that are rightfully yours.

Healing in a Hospital
June Special – a Master Class with Michael

Angela Jones runs this lovely session on Thursday evenings. Doors open at 7 p.m. for a prompt 7:30 p.m. start and runs until 8:30 p.m. Refreshments are available. The cost is £6. This is ‘An[...]
View Calendar
Add