You are here: Home › Blog › The amazing history of Holywell Christian Spiritualist Church and Healing Sanctuary
By Holywell Church on November 26, 2016 in News

The history of Holywell Christian Spiritualist Church is fascinating.

The Church was founded by Beryl and Ernie Springall (both now deceased). Beryl and Ernie originally came from London. Both suffered from ill-health at the time. Beryl visited a Healer in Gobowen after Doctors told her that following an operation, she had a 50/50 chance of being paralysed. Beryl was healed by the Healer and as a result, Beryl and Ernie decided to look into Spiritualism.

On visiting a spiritualist Church in Rhyl, Ernie received a message that he would “have a Church of his own”. This message gave them both great uplifment considering Bernie had suffered from several heart attacks and gave him the reassurance that he was going to survive his illness.

From that time on, Beryl and Ernie undertook healer training and gave healing to others in their Bungalow just up the hill from the Church. They then took their healing work to a Church in Brynford. But they were ideally looking for a Church of their own. A meeting with an architect 32 years ago proved to be a real milestone! The architect had seen that there was a barn in their grounds and suggested to Beryl and Ernie that he could come up with drawings to convert it into a Church! A small committee of 6 members came together to fund raise to fund the conversion. They held Clairvoyant Evenings and other events and put all the funds that were raised into the founding of the Church. Many kind volunteers gave of their time to work on furnishing and decorating the Church. As a result of this success story the Church was inaugurated 30 years ago by the The Greater World Christian Spiritualist Organisation to which we are still affiliated today.

The founders, Beryl and Ernie moved to Scarborough soon after this and gifted the Church to the committee on a 99 year lease. 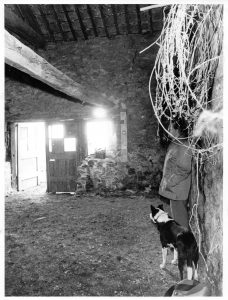 The photograph above shows the interior of the Church all those years ago before conversion work commenced. The result of all the dedicated hard work that went into its founding is the beautiful Church we all enjoy today. The anniversary of the Church is celebrated every year in a poignant service taken by Church Vice President Helen Jones. Not only is the Church used for healing and divine services but it is also used for naming ceremonies, weddings and funerals.

Comments on any memories you have on the church over the years are welcome.

Christmas at Holywell Church
The church is decorated for Xmas